Book Review: ‘This is Home – Essential Australian Poems for Children’

Last year the National Library of Australia published a handsome anthology of Australian poems for children, entitled ‘This is Home – Essential Australian Poems for Children’ (selected by Jackie French, illustrated by Tania McCartney). I was thrilled to have two poems included in the book (‘The Sash’ and ‘Dad Meets the Martians’), and to have the opportunity to recite ‘Dad Meets the Martians’ to an audience of children at the launch of the book in the foyer of the National Library. While the book is visually striking, I began to have significant reservations about it fairly soon. Nearly one year on from its publication, I feel it is reasonable to share these.

2. The poems appear to have been written primarily by either contemporary or ‘classic’ poets, with very little in between. By ‘classic’ I include the likes of Henry Lawson, ‘Banjo’ Paterson, C. J. Dennis, Norman Lindsay, Louis Esson, Leon Gellert, Ooodgeroo Noonuccal (Kath Walker), Judith Wright and Dorothea Mackellar. There are no poems, for example, by Max Fatchen, Bill Scott or Anne Bell. One might have thought a poem from ‘Sister Madge’s Book of Nuns’ (first published in 1986) by Doug McLeod would be an automatic entry. One might also have thought that the NSW School Magazine, surely by far the most prolific publisher of Australian poems for children over the last hundred years, would have provided a valuable resource for poem selection, but there is no evidence that this was the case.

3. Many of the poems by ‘classic’ writers are poor choices, if judging by their suitability for children. The poems included by ‘Banjo’ Paterson are ‘Clancy of the Overflow’, ‘The Man From Snowy River’ and ‘Waltzing Matilda’. These are probably the works for which Paterson is best known. While they can no doubt be enjoyed by older children, they are primarily written for adults. Paterson has written some fabulous poems for children. To my mind, the top three are ‘Mulga Bill’s Bicycle’, ‘The Man from Ironbark’ and ‘The Geebung Polo Club’. None of these are in ‘This is Home’. “The Man from Ironbark’ is probably performed in more classrooms across Australia than any other poem, because it lends itself so well to being acted out.

Henry Lawson is really not a great children’s writer. His subject matter is generally too dark. It is reasonable that he be represented in this book, but ‘Faces in the Street’ is one of his grimmest poems. Also, the illustration focuses for some reason on drought, which is not mentioned in the poem, and not urban poverty, which is its theme.

There are two poems by C. J. Dennis, ‘The Triantiwontigongolope’ and ‘A Bush Christmas.’ The first is definitely Dennis’ best poem for children, and an obvious inclusion. However, Dennis wrote an entire book for children (‘Book for Kids’, which he also illustrated), yet no other poems from this book are included. Instead, we have ‘A Bush Christmas’ (abridged), a poem which no doubt, once again, can be enjoyed by older children, but is essentially a poem for adults.

4. Many of the poems in the book are, in my opinion, simply too hard for most children. The best example, perhaps, is ‘Men in Green’ (David Campbell), about the bravado of men in wartime. In general, I think it is fair to say, there is a heavy bias towards poems for secondary rather than primary aged children, which is a pity.

5. While McCartney has done a lovely job illustrating my poem ‘The Sash’ (which tells the story of a young Ned Kelly boy rescuing an even younger boy from drowning, and being awarded in gratitude a green sash by the boy’s father), I was far less impressed with her illustration of ‘Dad Meets the Martians’. The poem begins with ‘Dad’ driving a Ford motorcar, and ‘the Martians’ driving a flying saucer. It ends, for reasons explained in the poem, with ‘Dad’ driving the flying saucer, and ‘the Martians’ driving the Ford. However, for some inexplicable reason, McCartney chose to add wheels to the flying saucer so that it still functions as a motor car, and ‘Dad’ is still Earthbound, while the Martians continue to fly in space while in the Ford (with wheels still attached). This completely undermines the point of the poem, and suggests that McCartney had not read it properly. ‘Dad Meets the Martians’ had been illustrated a number of times prior to this, and none had ever made that mistake.

There is one other illustration I have a problem with. I know the poem well, because I gave it an award when I was judging the Dorothea Mackellar poetry competition in 2016. It is about a New Guinea bird, the ‘bird of paradise’, and, with the bird acting as narrator, tells the sad tale of how the rest of its family have been shot and killed.

For some reason, the illustration is of the plant that bears the same name, ‘bird of paradise’. There is also an illustration of the plant flying like a bird, a charming enough notion in itself, but the overall impression (to this reader, at least), is that the illustrator does not know about the bird. Otherwise, why depict the bird as a plant flying like a bird? I know if I had written this poem, I would have been very disappointed with this illustration.

6. One last small point: ‘The Cross of the South’ is wrongly designated ‘Anonymous’. It was written by Kenneth Cook, author of ‘Wake in Fright’, as part of his ‘Stockade’ musical play (1971).

‘This is Home – Essential Australian Poems for Children’ is a handsome book, as I said earlier, and it is wonderful that NLA Publishing has chosen to publish a book of this nature. My only frustration is that it could have been so much better.

The National Library (NLA Publishing) has recently released an anthology of poems for Australian children entitled “This is Home – Essential Australian Poems for Children.” I am very happy to report that two of my poems – ‘Dad Meets the Martians’ and ‘The Sash’ – are included in the collection, which is lavishly illustrated by Tania McCartney. The poems were selected by Jackie French, perhaps best known as the author of the classic children’s picture book ‘Diary of a Wombat.’

The book was launched at the National Library in Canberra last Sunday (7th April), and I received an invitation to attend and read one of my poems from the book. As I happened to be in the area with my friend Maggie Somerville, I decided to attend. My son, Thomas, and his girlfriend, Catherine, are also living in Canberra these days, so the four of us made our way to the library in the early afternoon.

It was a beautiful sunny day. I can’t remember if I have ever been to the National Library before or not, but I have to say the entrance looks quite magnificent. 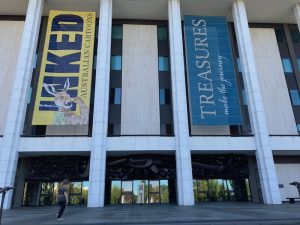 Susan Hall, the publisher, welcomed the guests and introduced the afternoon’s proceedings… 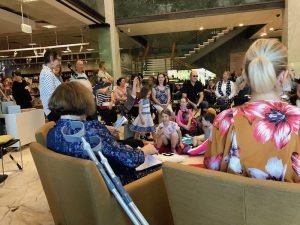 Margaret Hamilton officially launched the book, but I do not have a photo of her speaking. The best I can offer is the following photo with, from left to right (in the comfy chairs) Margaret, Jackie French and Tania McCartney. 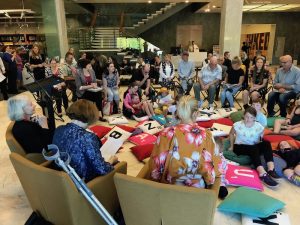 She was followed by Jackie French, who selected the poems… 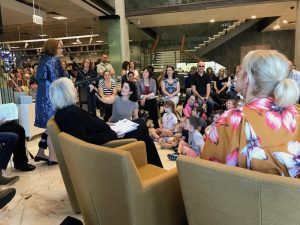 and Tania McCartney, who provided the illustrations. 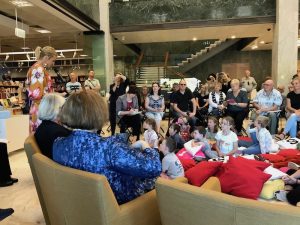 Both spoke with great passion about the book, and their contribution to it.

Next came the poets, a number of whom were in attendance, to read their poems.

Leo Barnard read ‘A Palace of a God’… 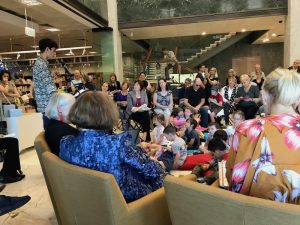 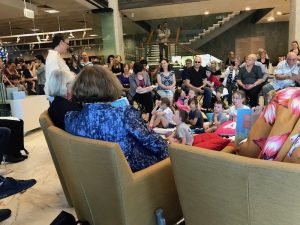 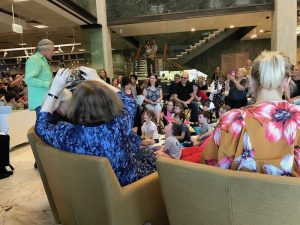 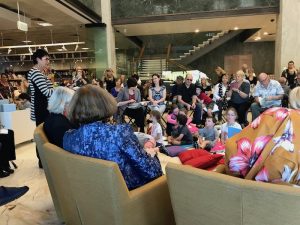 Libby Hathorn was the next to read, but I think I was distracted by my own imminent performance, and cannot be sure which of her three poems she read. I think it may have been ‘Cindric’s Trolley’, though. 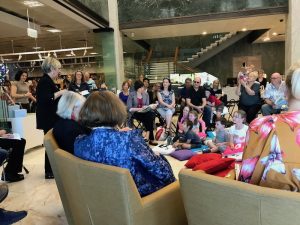 Geoffrey Page also read ‘Silver Wind’, but unfortunately I do not have a picture of him, either.

Lastly, I performed my poem ‘Dad Meets the Martians.’ I am pleased to say it was well received.

Then it was time to say goodbye to Thomas and Catherine… 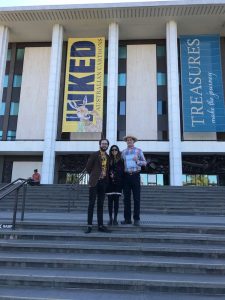 (thanks to Maggie Somerville for the photo) and skedaddle back to Melbourne in time for work at 9 am on Monday morning!

It had been a great day. 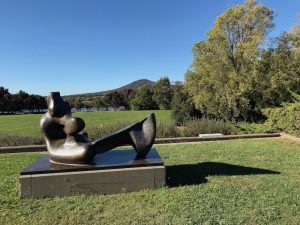