The Springtime it Brings on the Shearing 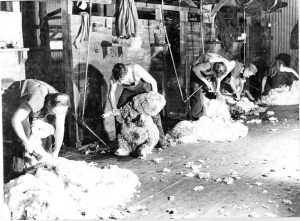 ‘The Springtime it Brings on the Shearing’ is the sixth song on Burl Ives’ 1953 record, ‘9 Australian Folk Songs.’ It has been recorded by many people since then, including Lionel Long, Gary Shearston, Martyn Wyndham-Read and the Bushwackers.

The song describes how the shearers are the heroes of the hour at the height of the shearing season, splashing money around carelessly. Once the shearing is finished for the year, however, you will generally find them camped on the banks of a river, living an extremely frugal existence.

A number of writers point out that the words have been taken from a poem, ‘The Wallaby Track’, by E. J. Overbury. For example, the second verse of the poem begins:

With a ragged old swag on his shoulder,
And a billy or pot in his hand,
‘Twould astonish the new-chum beholder
To see how he’ll traverse the land.

The second verse of ‘The Springtime it Brings on the Shearing’ reads as follows:

With a ragged old swag on my shoulder
And a billy quart-pot in my hand,
And I’ll tell you we’ll ‘stonish the new-chum
To see how we travel the land.

‘The Wallaby Track’ was first published in the Creswick and Clunes Advertiser, in 1865. (By way of historical context, Banjo Paterson was born the year before, in 1864, and Henry Lawson two years later in 1867. Dame Mary Gilmore was born in the same year. This is also probably the year when Ned Kelly, at the age of ten or eleven, rescued the seven-year-old Richard Shelton from drowning in Hughes Creek in Avenel, Victoria.)

Creswick and Clunes are two old Victorian gold mining towns in central Victoria. They are not far apart, and are often considered together. Creswick is perhaps best known as being the birthplace of the Australian painter and writer, Norman Lindsay. Clunes’ principal claim to fame these days is that it hosts the annual ‘Clunes Booktown Festival.’

Overbury also wrote two other well-known poems, ‘The Public by the Way’ and ‘The Loafer’s Club.’ 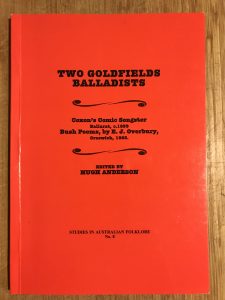 Overbury wrote a preface to his book, with his tongue firmly in his cheek. It reads as follows:

The great object I have in view publishing this little book is, if possible, to make a little money by it. If the purchaser obtains six-pennyworth of amusement from it, the benefit will be mutual. Like all virgin authors, I naturally expect that it will permeate through all classes of society, not only in this country, but in the most distant parts of the earth – that it may even cause some sensation amongst the crowned heads of Europe, and be recognised by the “Great Panjandrum” himself. Under these circumstances, I am willing to declare “The right of translation is not reserved.”

Anderson wrote an extensive introduction to ‘Two Goldfield Balladists.’ He tells us that “…Overbury was born in Scotland about 1830, and arrived as a cabin passenger on the Anne Cropper in May 1853, aged 22 years…”

He goes on to say that Overbury spent most of his time in Australia employed by the Anderson brothers – James, John and William. He also rented his home from them. The Andersons were based in the gold fields of central Victoria, and their primary business was supplying timber for the deep leads. When local supplies were exhausted, tramways were laid deep into the Wombat State Forest. Their empire continued to grow, and they became involved in land speculation and agriculture. They built a five-storey flour mill in nearby Smeaton, which still stands today. (Overbury wrote his ‘Preface’ from Smeaton.) 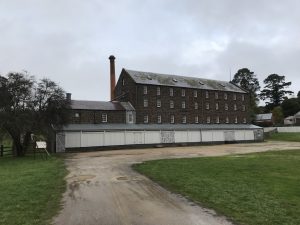 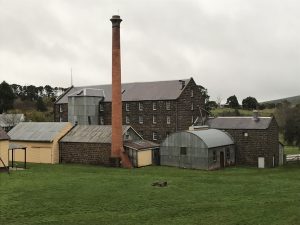 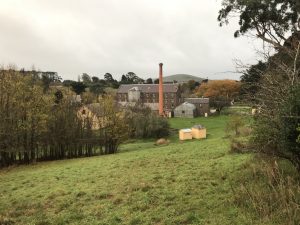 Hugh Anderson makes the point that there is some confusion about Overbury’s middle name, as it is sometimes given as ‘Irvine’. Dr Graeme Skinner confirms that his middle name was indeed ‘Irvine’, and the initial ‘J’ is therefore an error. Skinner also tells us that Overbury was born in Westbury, Wiltshire (via Bath), England, on 5 September 1830. Information provided by Skinner is far more detailed, and also much more recent, than that provided by Anderson, so I am inclined to think it is also more accurate.

Eight years after ‘Bush Poems’ was published, in 1873, Overbury wrote a letter to The Australasian newspaper in Melbourne. He was now in Glengower, not far from Smeaton. The letter was published in part, with an editorial response, in The Australasian, Saturday 8 August 1873, on page 16. He is complaining about a man – whom he names (but the editor chooses not to) – who is making minimal changes to Overbury’s work, and passing it off as his own.

“E. J. Overbury” (Glengower) – This correspondent writes to us to give satisfactory proof that he is “the real author of the songs termed the ‘Wallaby Track,’ ‘The Public by the Way,’ ‘Jack and I,'” &c, and in support of his claim gives the names of a good many respectable gentlemen as references. We regret that we are not familiar with the compositions themselves. He says “the songs themselves are certainly not worth much notice grammatically speaking. No doubt error abounds in them to a large extent. But the working classes in Victoria, New South Wales and Queensland appreciate them, and I do not believe that a party who calls himself ______ should intentionally rob me of that little approach to fame that I am certainly due. Mr. ______ represents himself as the author of all these songs. He attends in shearing time every station that can possibly lie in his route. He partially makes a parody by calling ‘The Public by the Way,’ ‘The Shanty by the Way,’ but every word in it except the change of substantives is mine. The same with the ‘Wallaby Track,’ and as time, and ignorance, and dishonesty advance, I fear that others of my own composition may suffer the same fate.” We are sorry to learn that Mr. Overbury, like other men of creative genius, suffers from the competition of plagiarists. He may, however, take it as a proof of his popularity when his songs are acceptable even in their altered and plagiarised form. We trust that as time advances ignorance and dishonesty will not advance too, and that his rival minstrel will come to rely on songs of his own production.

it is clear the editor has little respect for Overbury. He does not know his poems, and refers to him sarcastically as a ‘creative genius.’ Overbury had the last laugh, of course, with his words now immortalised in ‘The Springtime it Brings on the Shearing.’ His rival also achieved some long-term success, however. ‘The Public by the Way’ is now better known as ‘The Shanty by the Way.’

Hugh Anderson tells us that Overbury died in Creswick Hospital on 22nd February 1898. The local papers noted the death of “an old resident of Smeaton.” The records of the Smeaton cemetery referred to him as “the local bush poet.”

I can find no information at all about the tune to ‘The Springtime it Brings on the Shearing’. To my ear, it sounds quite similar to ‘The Dying Stockman’. 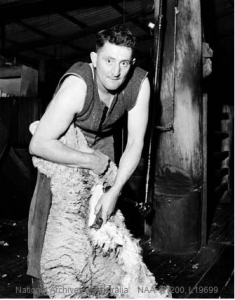