‘The Station Cook’ is one of nine songs included on the album ‘Australian Folk Songs’, released by the American folk singer Burl Ives following his visit to Australia in 1952. This album can quite fairly be said to have triggered the Australian folk revival. The ‘station’ referred to in the song is, of course, a sheep station. In the song, the narrator, a shearer, tells us sarcastically of the cook’s great prowess, serving up a variety of delicious dishes. In truth, the shearers have fallen ill, and they blame the cook! This is a popular theme in the culture of early colonial Australia. No doubt the most iconic of them all is the cook, Old Garth, in the 1975 film ‘Sunday Too Far Away.’

The tune for ‘The Station Cook’ is taken from a Scottish song, ‘Musselburgh Fair’. Musselburgh is a town in Scotland, only a short distance east of Edinburgh. The same tune is used for ‘Lachlan Tigers’.

The song tells us that the cook works at a shearing shed in Fowler’s Bay, and the song is sometimes also called ‘Fowler’s Bay.’ ‘Fowler’s Bay’ is a coastal town in South Australia, located to the west of the Eyre Peninsula, in a bay of the same name. The bay was named by Matthew Flinders on 28th January 1802, after his first lieutenant, Robert Fowler. The town was originally named ‘Yalata’ after Yalata (sheep) Station, that was established there in the 1860s. Yalata Homestead was built in 1880. The ruins can still be visited today.

We are also told in the song that, amongst other things, the cook serves up ‘doughboys’. These are a doughnut precursor, probably of American origin. There is a ‘Doughboy Island’ in Corner Inlet, Victoria (near Wilson’s Promontory). I imagine the name comes from its small size and round shape. The other food items mentioned in the song are plum-duffs, dumplings and pies. Plum-duff is a traditional English pudding, an earlier and simpler form of today’s plum pudding. (‘Duff’ is an early pronunciation of ‘dough’, from the north of England.)

The website ‘SecondHand Songs’ states that ‘The Station Cook’ was first published in the newspaper ‘The Australian Star’ in 1877. However, according to the online research portal Trove this newspaper, which was published in Sydney, began publication in 1887. ‘SecondHand Songs’ also states that the words were submitted by P. J. McGovery. It also says that whether he wrote the words, or was simply a reader of the newspaper, is not clear. I can find no other reference to P. J. McGovery.

‘The Station Cook’ should not be confused with ‘Station Cook’, a song by John Williamson. 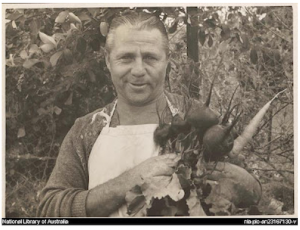