‘Botany Bay’ is the third song on Burl Ives’ seminal 1953 album, ‘Australian Folk Songs.’ It was signed, sealed, and delivered to Australia by Englishmen which, I must admit, I find a little depressing. There was no creative input by any Australian at all. Nevertheless, the Australian people have taken it to their hearts, no doubt in part because it is such a good ‘singalong’ song.

Before I go any further, we need to talk a little about Botany Bay. It was so named by Sir Joseph Bsnks, the botanist accompanying Captain James Cook when he sailed up the east coast of Australia in 1770. Banks was swept away by the rich variety of plant life in the area. (Initially, Cook referred to the area as Stingrays Harbour because of the large numbers of these fish that they caught.)

Cook noted the entrance to Sydney Harbour, but did not sail into it, and no doubt failed to properly appreciate its full potential. He named it Port Jackson after Sir George Jackson, one of the Lords Commissioners of the British Admiralty. The early settlement of what is now Sydney began at Botany Bay, when the First Fleet (consisting of eleven ships, of which six were filled with convicts), under the command of Governor Arthur Phillip, landed in 1788. The land was low lying and swampy, however, and Phillip quickly moved the settlement north to Port Jackson, which was far more suitable. They chose a small bay which they named ‘Sydney Cove’, and there began Australia’s first convict settlement.

The song ‘Botany Bay’ featured in a musical melodrama, ‘Little Jack Sheppard’, which premiered at the Gaiety Theatre in London in 1885. It was staged in Melbourne, at the Opera House, the following year (1886), and Sydney the year after that (1887). (Yes, that’s right, the Melbourne Opera House!) It was written by Henry Pottinger Stephens and William Yardley. The music was written by Meyer Lutz, with songs written by others. It is not clear exactly who wrote ‘Botany Bay’. The Gaiety Theatre programme in London credits Lutz, but the sheet music published by Allen & Co. in Melbourne credits Florian Pascal (the pseudonym of Joseph Williams). The London newspaper ‘The Era’ stated in 1890 that the melody was a hundred years old. 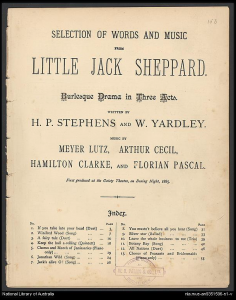 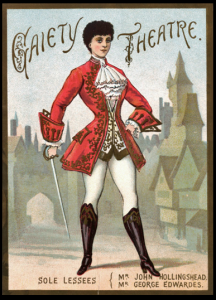 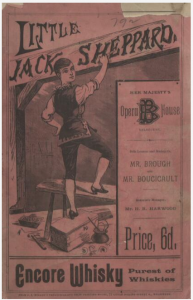 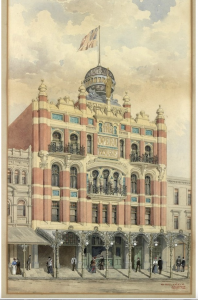 (The Melbourne Opera House – Courtesy ‘Beyond the Name – Peculiar Places’)

Jack Sheppard was a real person, and he inspired many serious plays, one of which was turned into a novel. ‘Little Jack Sheppard’ was written as a parody of these. He was an English thief who was best known – and loved – for his multiple escapes from gaol. He was eventually hanged in London in 1724. A crowd of 200,000 people (a third of the population of London at the time!) formed a procession as he was taken to the gallows. An ‘autobiography’ was distributed, thought to have been ghost written by Daniel Defoe, the author of ‘Robinson Crusoe.’ As Sheppard’s dead body was cut down, a crowd of people gathered around to prevent it being taken away for post-mortem examination.

The song is written from the perspective of one of the English convicts who has been transported to Australia for a seven-year penal sentence. He is still on-board ship, and is singing on behalf of his fellow convicts as well as himself. it is a warning, albeit a very jolly and light-hearted one, for fellow potential criminals not to follow the path the narrator has chosen or else they, too, will end up in a similarly unenviable position. 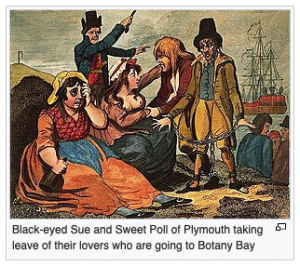 Many of the words to ‘Botany Bay’ bear a resemblance to a much earlier song. ‘Here’s Adieu to All Judges and Juries’ is thought to have been written in about 1820. The song’s sentiments are very similar to those expressed in ‘Botany Bay’, though the mood is much more sombre.

Oh, had I the wings of a turtle-dove,
I’d soar on my pinions so high,
Straight back to the arms of my Polly-love,
And in her sweet presence I’d die.

‘Adieu to All Judges and Juries’ has this:

Oh, if I had the wings of an eagle
High up on these pinions I’d fly.
I’d fly to the arms of my true love,
And in her soft bosom I’d lie. 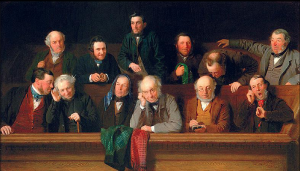 The Jury (1861) by John Moran (Wikipedia via Buckinghamshire County Museum)

Indeed, it is worth taking a small diversion here, and noting the frequency with which the fantasy of being able to fly to a far distant, much happier place appears in other folk songs. For example, ‘The Dying Stockman’:

Oh, had I the flight of a bronzewing,
Far o’er the plains I would fly.
Straight back to the land of my childhood,
And there I would lay down and die.

‘The Dying Stockman’ was adapted from another song entitled ‘The Tarpaulin Jacket.’ The second verse reads as follows:

Had I the wings of a little dove,
Far far away would I fly; I’d fly
Straight for the arms of my true love
And there I would lay down and die.

Today we have our own big steel birds to take us quickly to where we want to be – provided we have the money for the fare, and all the paperwork is in order. Perhaps there is some irony in the fact that the area around Botany Bay is today the site of Sydney Airport.