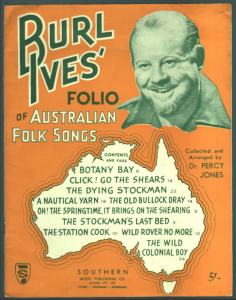 Since the death of Pete Seeger I’ve been listening to him more and more – and the most satisfying examples of his work are coming from the episodes of his TV show “The Rainbow Quest” on YouTube. I’d stumbled on these in a haphazard way in the past, never giving them too much thought, but now I realise just what utter treasures they are, and am viewing them – and the show itself – in a much more considered way.

Here is my little poetic tribute to “The Rainbow Quest” (with some thanks to Wikipedia, too).

Pete Seeger had many a musical guest
On his little TV show,”The Rainbow Quest”.
They came from all over, with banjos in tow,
To jump on the set, and be part of the show.

Few people saw it. The budget was slight
(Thirty-nine episodes, all black and white),
But Seeger was having the time of his life,
Ably assisted by Toshi, his wife.

Folk, old-timey, bluegrass, blues,
They came on board to spread the news
That musical talent was everywhere,
Though many were troubled, and worn with care.

They carried the message that music brings
Hope to the plucker, the person that sings;
That it opens your lungs, that it fills your heart,
That it brings fresh hope of a bright new start.

These weren’t the tunes of expensive schools.
They were ordinary folk with handmade tools,
Yet ‘ordinary’ doesn’t describe them well.
They were gifted maestros with tales to tell;

Seeger’s childhood wasn’t that tough,
A white boy’s romp through bubble and fluff,
Yet he formed a rapport with these women and men
Through the bonds of strumming, and pencil or pen.

He formed a bridge that is all too rare
‘Tween the world of wealth, and the world of care;
‘Tween black and white, and Indian, too
(While Toshi directed the camera crew).

He’s gone now. No new notes will come
From his throat. No strumming of finger or thumb.
Yet I believe that his legacy
Will only grow – well, it will for me.

There’s live recordings of concerts grand
Where he’s backed by a talented, jaunty band,
But perhaps the record that captures him best
Is that little TV show, “The Rainbow Quest”.

Back in 2008, after I had published my first little collection of poetry, “Poems of 2007”, I decided to send a copy to Pete Seeger. I had always enjoyed his singing and his songs enormously, and I thought now I would try to return the favour.

At the last minute I also popped into the envelope a photocopy of my most popular poem, “Dad Meets the Martians”, as it had appeared in America’s “Cricket” magazine for children.

Imagine my surprise and joy when, some time later, I received a letter in the mail from the man himself!

He had written on the poem:

Stephen –
thanks for poems
Pete Seeger

(Thank you to Lars Leetaru for very kindly giving me permission to reproduce his beautiful artwork here.)