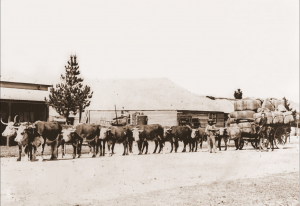 ‘The Old Bullock Dray’ is the third song on Burl Ives’ 1953 LP ‘9 Australian Folk Songs’, that did so much to spark the Australian folk revival. It is also a very difficult song to write about because of its racist connotations. (A ‘dray’ by the way is an open wagon, with no sides. I think we all know what bullocks are.)

Mark Gregory tells us, on his ‘Australian Folk Songs’ website, that ‘The Old Bullock Dray’ was first published in ‘Queensland Figaro and Punch’ on 9th November 1887, where it is introduced as an ‘Old Bush Favourite’, so presumably it had already been around for quite a while. (This was an amalgamation of two earlier newspapers – Queensland Figaro and Queensland Punch.) It was also printed in Banjo Paterson’s ‘Old Bush Songs’ in 1905. There are small but significant differences in the two sets of words.

The narrator is a shearer. The song begins with him addressing his colleagues at the end of another shearing season, telling them of his plans to settle down and raise a family. The only problem is, he doesn’t have a wife – a very significant obstacle, one would have thought, but also a very common problem for men in early colonial society. (The song is nothing if not a paean of optimism!)

Paterson explains much of the song in his introduction to it. (I don’t have a copy of the original 1905 edition of ‘Old Bush Songs’. I am referring here to the Centenary Edition, published by ABC Books in 2005, edited by Warren Fahey and Graham Seal.) The narrator (Paterson refers to him as ‘the minstrel’) explains that he has a big enough cheque to head into town and buy himself a bullock team.

And when i get a missus, boys, I’ll be all serene.
By applying at the depot. I hear there’s no delay
In getting an off-side partner for an old bullock dray.

Paterson: “Calling in at the Depot to get an offsider” – female immigrants were housed at the Depot on arrival, and many found husbands within a few hours of their arrival. An offsider is a bullock-driver’s assistant – one who walks on the off-side of the team and flogs the bullocks on that side when the occasion arises. The word afterwards came to mean an assistant of any kind.”

In the chorus, however, the narrator is now addressing his prospective wife rather than his fellow shearers. He is telling her all about the wonderful life that awaits her as his husband. The emphasis is very much on the large amount of good food he will be providing – lots of damper and fresh fish. He will also, of course, teach her how to flog the bullocks with a whip. (He also explains, of course, that they will not have a honeymoon!)

As the song comes to an end, the narrator expresses frustration that the woman at the Depot has not accepted his marriage proposal. Indeed, it appears to have been met with cold silence, and he is feeling badly hurt. He sings now instead of his plans to marry an Aboriginal woman, though it is not clear who is addressing. Perhaps he is simply singing to himself. Fighting for survival in an extremely hostile environment, their husbands very likely having been murdered, Aboriginal women were no doubt not nearly as fussy as the British women at the Depot.

We’ll have lots of picaninnies, but you mustn’t mind that,
Flash little Maggie and Buckjumping Pat,
Stringy-bark Joe and Greenhide Mike.
“My colonial,” you can have just as many as you like;

There was no old age pension in the 19th century, so having plenty of children increased your chances of being well cared for when you were told old and infirm to care for yourself.

Understandably, the word ‘picaninnies’ has been replaced by ‘girls’ in the Centenary Edition of ‘Old Bush Songs.’

The following four images accompany the 1887 printing of ‘The Old Bullock Dray’ in Queensland Figaro and Punch. 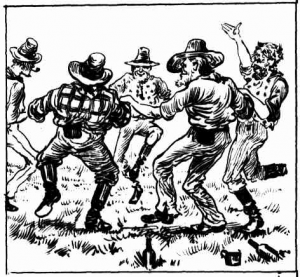 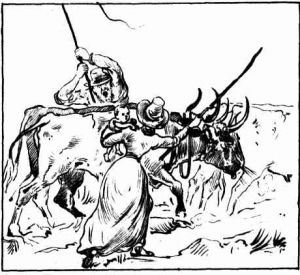 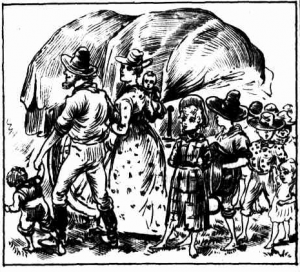 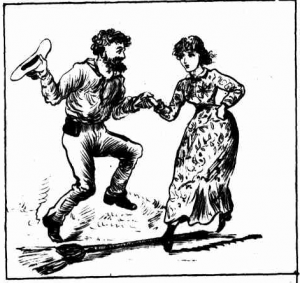 The website ‘An Australian Folk Song A Day’ tells us that the tune to ‘The Old Bullock Dray’ comes from an old American folk tune, ‘Turkey in the Straw’. This tune has been the subject of considerable controversy in recent times because it has often carried highly racist lyrics. It is also the tune often played by American ice cream trucks (I imagine in the same way that Mr Whippy in Australia is associated with Greensleeves). More information can be found here:

A discussion about ‘Turkey in the Straw’ on the website of Ferris State University makes the following point:

“It was a popular black-faced minstrel show song and one of the most popular sheet music covers for the song is dominated by an image of a caricatured black man.” 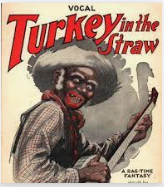 The full article can be found here:

This article on the website of the American Library of Congress discusses the history of ‘Turkey in the Straw’ in considerable detail: 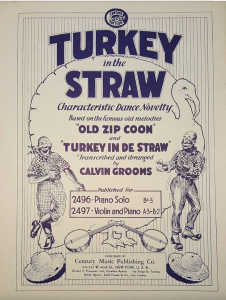 It makes the point that for much of its long and varied history, ‘Turkey in the Straw’ has not been associated with racism at all. To quote from the article:

“When the tune entered twentieth-century pop culture, it usually didn’t refer to African-American people, or at least it didn’t seem to. In fact, sometimes it didn’t refer to people at all: it was a major part of the Disney animated short Steamboat Willie, which introduced the characters of Mickey and Minnie Mouse.” It can be viewed here:

‘Turkey in the Straw’ is itself derived from an old Irish tune, ‘The Rose Tree.’ One performance of it can be found here: 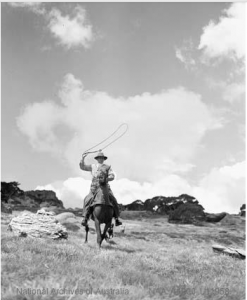 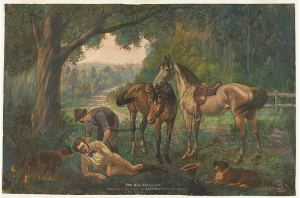