The Australian folk song, ‘Gum Tree Canoe’, would appear to have been adapted from an American song of the same name, written by Silas Sexton Steele in 1847. The American version has been recorded by several artists, the most prominent perhaps being the American musician John Hartford, who included it on his 1984 album of the same name. 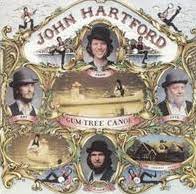 Mindful that the Australian gum tree, the eucalypt, had not been introduced to the U.S. until the late 19th century, I turned to Quora, a Californian website for asking and answering questions. I received a prompt reply from Ben Waggoner who said that, while he was not familiar with the song, he suspected the tree referred to in the American song was the sweetgum tree, Liquidambar styraciflua. To quote Waggoner directly,

This is a native tree to the southeastern United States, and it does exude a sweet gummy sap when cut. My grandmother used to chew the sap instead of chewing gum. The leaves turn an attractive red in the autumn, and the dry spiky fruits are excellent for throwing at people if you are an obnoxious seven-year-old.

He posted an addendum that the song refers to the Tombigbee River, which is very close to where his mother grew up, in the town of Columbus, Mississippi.

I have uploaded onto YouTube a video I took of the Victorian Folk Music Club performing the Australian version of ‘Gum Tree Canoe’ in 2015 at the annual Wattle Day Festival held in Hurstbridge, Victoria. The musicians are wearing yellow and green, the colours of the Australian wattle. Here is the link:

A performance of the American version of ‘Gum Tree Canoe’ by John Hartford can be found here:

I must admit, I was amazed to discover there was an earlier version of the song that was not about eucalypts at all!

Last Sunday, August 31st, I participated in the Wattle Day celebrations at Hurstbridge in Victoria.

I was part of the Victorian Folk Music Club’s “Billabong Band”, and my duties were largely confined to playing the lager phone and singing along on the choruses, though I did get to sing a duet on “Home Among The Gum Trees”, and sing Maggie Somerville’s anthemic “Wattle Day” song with her.

I haven’t quite yet been able to fathom the full history of Wattle Day, but Hurstbridge seems to have been intricately tied up with it for a very long time.

Maggie found this photo of the Wattle Day celebrations at Hurstbridge in 1912.

The caption reads: “Wattle Day at Hurstbridge in 1912: In the 1900s a great deal was made of Wattle Day. Crowds flocked to the station to view the magnificent wattle.”

So it would seem that Wattle Day and railway lines go together. I attended the festival with Maggie, and we parked her kombie at Eltham and took the train to Hurstbridge to avoid the inevitable parking problems that we would face there. The stop prior to Hurstbridge is “Wattle Glen”.

Nevertheless, it would appear that the practice of celebrating Wattle Day at Hurstbridge died out at some point, because the current festival began as recently as 2004. This was in response to two key events, outlined as follows on Wikipedia.

2. “Four years later, 23 June 1992, Bill Hayden, the then Governor-General of the Commonwealth of Australia, declared that ‘1 September in each year shall be observed as “National Wattle Day” throughout Australia and in the external Territories of Australia.'”

Hurstbridge now even has its own “Wattle Cafe”.

Decorations for the day were elaborate:

Members of the audience gathered under the Wattle Tree.

The signage was also clear.

Of all the VFMC members, I think it is fair to say that Maggie’s ensemble was the most complete.

Undoubtedly, though, our President, Harry, was the most colourful.