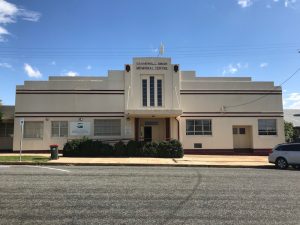 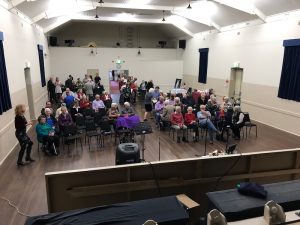 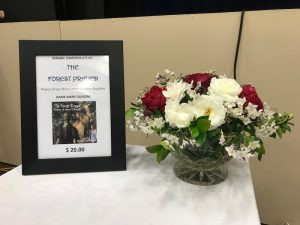 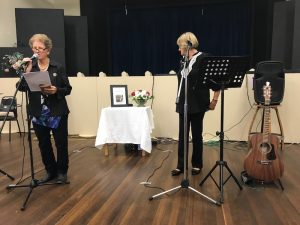 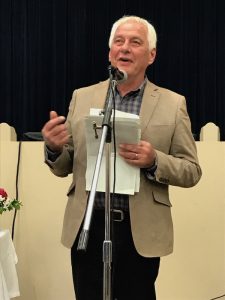 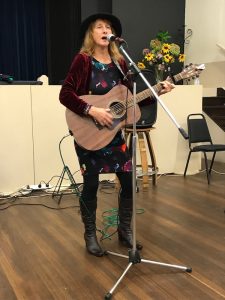 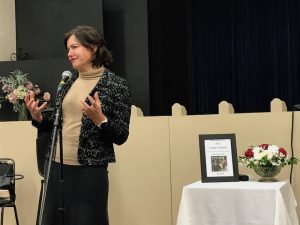 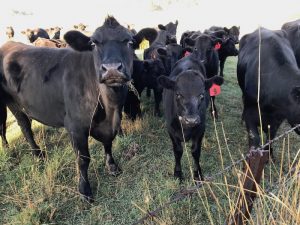 Early on the morning of Friday, 27th October, Maggie Somerville and I headed north up the Hume Highway to Crookwell in New South Wales for the Mary Gilmore Festival.

Maggie has put a number of Mary Gilmore’s poems to music and the Festival Director, Trevene Mattox, was keen for us to attend. (There is also ample scope for a poet at the festival.)

To get to Crookwell, you go past Yass (not through it, as we did; it is a very pretty town, but does not get you any closer to Crookwell, as we found) and leave the highway at Gunning. You then climb steadily for an hour or so through open country until you reach Crookwell, at an elevation of about a thousand metres.

After erecting our tent at the Showgrounds, we drove into town for the opening of the festival at the art gallery by the local member of parliament, The Hon Angus Taylor MP, Member for Hume.

Angus made the point that, while Dame Mary Gilmore was undoubtedly a highly admirable woman, she and he differed in their political views.

The following morning, we were invited to perform to the local market goers. Maggie sang a number of her songs to an appreciative audience.

The Reserve Bank was even in attendance showing off the new banknotes, with Dame Mary Gilmore and the opening words of “No Foe Shall Gather Our Harvest” on the ten dollar note.

During the afternoon we witnessed a showcase of the local youth talent, and in the evening we were treated to a performance by a women’s choir from Wollongong. The performance took place in a pavilion with a corrugated iron domed roof. Unfortunately a short, sharp rain shower completely drowned out the first item of the evening’s concert! The choir was superbly rehearsed, with numerous lavish but highly efficient costume changes taking place over the course of the show.

The following morning was the “Poets’ and Balladeers’ Breakfast” and Maggie and I had ample opportunity to perform. Maggie sang the remainder of her Mary Gilmore songs, while I performed a newish Ned Kelly poem that went down well.

At the end of the show, Maggie was asked to draw the raffle.

(I should add that this was also Maggie’s birthday!)

Alas, now it was time to leave Crookwell and begin the long drive back to Melbourne – in time to be at work at 9 am the following morning.

Maggie and I are extremely grateful to Trevene Mattox for giving us a lovely weekend. We were looked after extremely well, and had a wonderful time.

It was also great to catch up with poet Laurie McDonald and his wife, Denise, from Canberra. (Laurie and I shared MC duties for much of the weekend.) Laurie explained that the Crookwell festival used to have more of a bush poetry focus, but in recent years the emphasis has been on Mary Gilmore, and music. That made sense to me, because I have vague memories of submitting poetry to a competition in Crookwell in years past.

It was also wonderful to meet Stephen Lindsay, a local musician who owns a studio and is doing a great job recording local musicians and personalities on CD.

These rustic dwellings caught my eye as we left town.