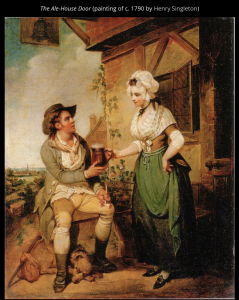 The Ale-House Door (painting of c. 1790 by Henry Singleton – courtesy of Wikiwand)

‘Wild Rover No More’ is the eighth song on Burl Ives’ 1953 album ‘9 Australian Folk Songs.’ It was included in Banjo Paterson’s ‘Old Bush Songs’, and also in Douglas Stewart’s and Nancy Keesing’s ‘Old Bush Songs.’ Having said that, there is nothing distinctly Australian about the song at all, and very few Australians have recorded it. The song would appear to have been originally written for the temperance movement, propaganda to discourage the consumption of alcohol. Ironically, it is now best known as a drinking song, and is very popular in the pubs of Ireland. In recent times, it has mostly been recorded by Irish performers – The Pogues, The Dubliners, The Clancy Brothers, The High Kings, etc. Having said that, when The Clancy Brothers introduce the song on Pete Seeger’s Rainbow Quest TV show in the 1960s, they refer to it as “an old Australian song.”

Despite the song’s popularity in Ireland, the origins of the song most likely lie with England. There is also evidence that an early version of the song was sung by fishermen in the North Atlantic. The website ‘Mainly Norfolk’ tells us that ‘Wild Rover No More’ probably evolved from a song entitled ‘The Green Bed’, where the poorly treated ‘rover’ is a fisherman. 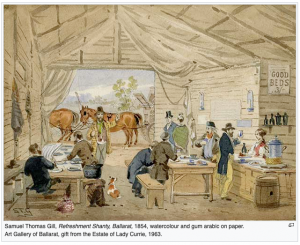