Last Saturday I went bushwalking in Creswick. I was not sure what to expect, but it turned out to be a fascinating afternoon. I had been planning to have an overnight walk in the region of Mt Hotham, but the forecast of snow showers put me off. I’m not really set up for snow camping. I don’t know the area around Creswick, and central Victoria more generally, at all well, as I have spent so much time over the years in the northeast – Kelly Country, and the mountains.

I was following the track notes for the first walk in a book, ‘Victoria’s Goldfield Walks’, by Glenn Tempest. The Creswick Forest Walk is the first of twenty in the book. The walk begins in the town of Creswick itself, by the town hall, and I parked my car in the main street. I was advised to walk down Water Street to Creswick Creek, and then head upstream. The flow of water in the creek was so slow, however, that I had to walk onto the bridge and spend some time staring at the water until I was sure which way it was flowing!

Twenty minutes or so later, I found myself on the banks of St Georges Lake. 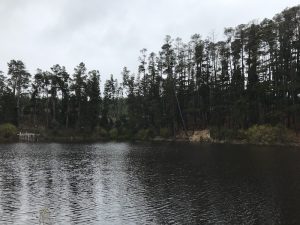 This was quite a revelation – all the more so when I learnt that the lake had been built by miners in the 19th century to service the gold industry – mainly, I think, the battery in Creswick. For some reason I had it in my mind that I would be heading south, away from the lake, but the reverse proved to be the case. I was instructed to walk north over the dam wall, and along the northern shore. There is an ancient, decrepit jetty there that looks very mysterious. I would love to learn more about it one day. 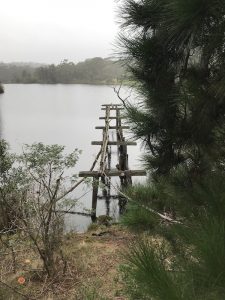 The walk along the northern shore is very beautiful. The vegetation is mostly pine trees – indeed, pine trees proved to be the theme of the afternoon – with no understorey, which is usually the way with pine trees. Some yellow coloured vegetation flourished at the water’s edge. 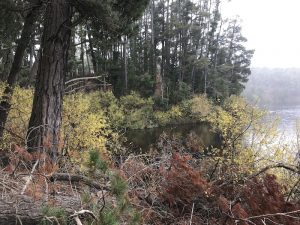 Things started to get a little tricky, however, once I reached the eastern extremity of the lake. The track notes advised me to leave the lake, and follow the walking track that ran above the western bank of Creswick Creek. I was advised to follow this until I reached an old fence that once belonged to the now abandoned Koala Park. Alas, the track was only present in vague traces here and there. I spent a great deal of time stepping over fallen timber. The going was very slow, and I eventually decided to cut my losses, retrace my steps back to the car, and try to approach the Koala Park from the opposite direction.

The scenery was desolate and rather spooky, and did nothing to encourage me to continue. 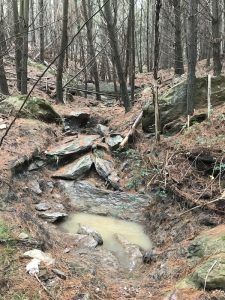 Once I reached the lake, I decided to walk back the other way, so I could at least complete a circumnavigation. I came across a board walk, but never managed to find the way on to it. 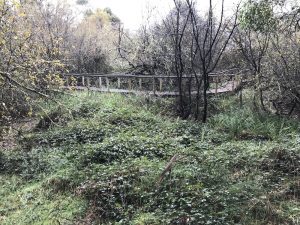 I wasn’t that fussed. I had bigger fish to fry.

Prior to Saturday, I also had not realised that Creswick is regarded as the home of Victorian forestry… 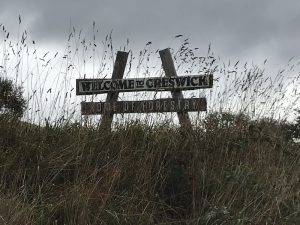 …nor that the University of Melbourne’s School of Forestry is based at Creswick. It is a grand old mansion on the side of a hill in Water Street. Continuing up Water Street in the car, I continued on up Brackenbury Road, a narrow, dirt road, until I came across the Goldfields Walking Track once more. (This is very well marked, with square posts in the ground – roughly a metre high – with brightly coloured painted yellow (for the gold!) tops.) I had planned to head south to try to find the Koala Park, but the trip downhill to the north looked much more interesting and promising. 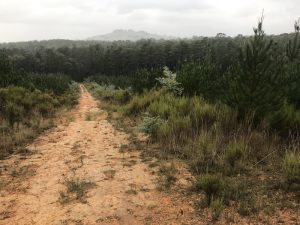 It was an easy walk down through the plantation of young pine trees (I knew it would not be so easy walking back up again!) until I entered – very suddenly – a mature forest. The track continued downhill.

Suddenly I found myself in a beautiful glade of unfamiliar trees. Again, there was no understorey, which added to the beauty. 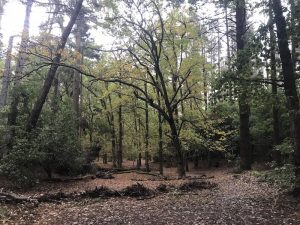 At first, I was not sure what they were, but the sign spelled it out very clearly. 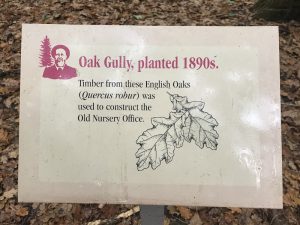 The English oak trees created a yellow glow, and created a very peaceful, gorgeous scene. I half expected Robin Hood and his Merry Men to jump out at any moment! 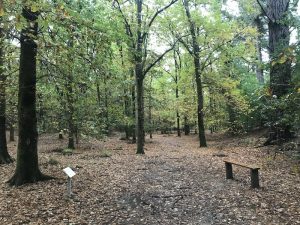 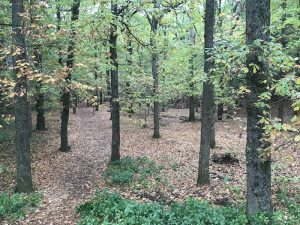 People had been very busy creating cubby houses around the bases of many of the trees. (I hesitate to say children were responsible. My guess is their parents had a fair bit to do with it, too!) This was the pick of them. 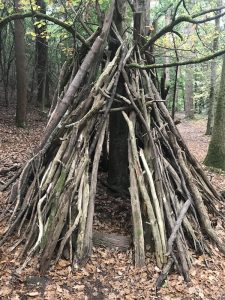 Leaving the gully at its northern end, I was once again unsure which way to turn, or how long it would take to get to wherever it was that I was going. Time was running short, and I did not want to arrive back in Melbourne too long after dark. I retraced my steps back to the car once more (the climb did not prove as taxing as I was expecting), and drove to the end of the walk, in Sawpit Road. This is all much better prepared for the walker, as it is primarily celebrating the life and works of the man now regarded as the father of Victorian forestry, John La Gerche. There are heaps of signs, and the tracks are wide, and well maintained.

I more or less stumbled upon a remarkable carving of the man himself. 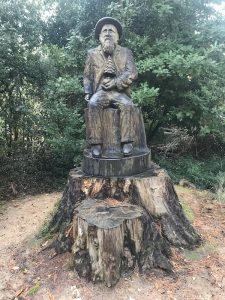 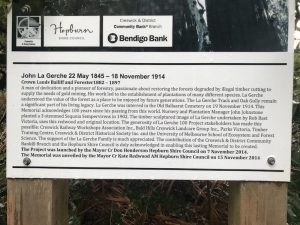 it is clear that La Gerche spent a great deal of time experimenting with various exotic trees, and meticulously planting individual seeds. He strikes me as having been a gentle soul, as well as a man of great intellect and foresight. I couldn’t help wondering how he would feel about modern day forestry practices, especially as they relate to native forests.

Sawpit Gully is where it all started. 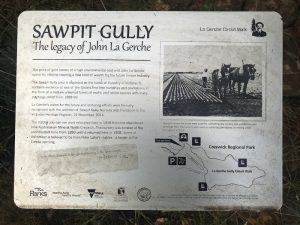 Extensive plantations were created, of both native and exotic species. They were generally planted on land that had been previously mined. In these days prior to mechanisation, horses were required to pull the ploughs. Naturally enough, there were stables for horses. 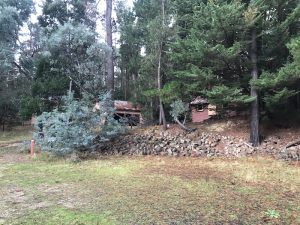 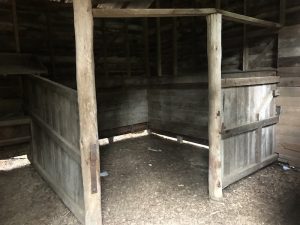 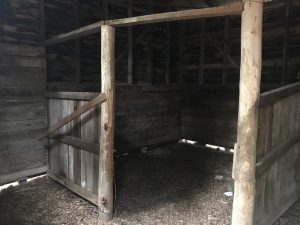 It was time to go home. I had failed in my original mission to walk the full 14km, as outlined in the track notes, but I had had a fascinating and physically bracing afternoon nonetheless. It is always great to get out of the city for a few hours!