‘A Nautical Yarn’ is one of the nine Australian folk songs that American singer Burl Ives recorded in 1952, and which were to have such a profound effect on Australians’ perception of their own folk music heritage. The ‘yarn’ takes place on the Murray River. (Whether the adjective ‘nautical’ can be applied in the context of fresh water is arguable.) The words are credited to Keighley Goodchild. They are a play on the general notion of shipwrecks, so many of which occurred, and so tragically, in the 19th century. A paddle steamer is making its way upstream to the town of Wahgunyah (the furthest upstream port on the Murray) when a storm arises during the night. The crew fear for their lives, but the boat is grounded on a sandbar, and they all walk safely through the shallow water to shore!

According to his obituary, which was published in The Riverine Herald in 1888, Goodchild was born in London, and had a good education. He had arrived in Melbourne fifteen years earlier (1873) from New Zealand. How long he had been in New Zealand is not stated.

The Echuca Historical Society also has information about Goodchild’s life. He was born in 1851. (By way of historical comparison, Henry Lawson was born in 1867, and Ned Kelly in 1855.) Goodchild was very much a newspaperman. In Melbourne he worked for the Argus. He moved to Echuca in 1880, and stayed there until his death at the age of only 37 of ‘consumption’ (TB) in 1988. He worked for a number of newspapers, and was editor of the Echuca Advertiser. For the last two years of his life he worked as a compositor for The Riverine Herald. (It was the job of a compositor to arrange type for printing.) He also published a column under the title ‘Municipal Musings’. (Many of these can be easily accessed via Trove.)

Goodchild also wrote poetry, and in 1883 he self published a small collection of his own work with the title ‘Who Are You? : A Volume of Verse’. One of the poems in this book, ‘While the Billy Boils’, was included in the final volume of a series of poetry collections published in London. The series was titled ‘Canterbury Poets’, and the final volume, with Goodchild’s poem, ‘Australian Ballads and Rhymes: Poems inspired by Life and Scenery in Australia and New Zealand’ (1888), was edited by B. W. Sladen of Oxford. (Goodchild received his copy several days before he died.) The phrase, ‘while the billy boils’, was just beginning to gain traction in Australia and New Zealand, and this was not the first time it was used. It was also chosen as the title of Henry Lawson’s first collection of short stories, published in 1896. Lawson did not use the phrase himself, but his editor, Arthur Jose, felt it was apt. (Jose almost certainly knew of Goodchild’s poem.) Plans were afoot for a second collection of Goodchild’s verse to be published in London, but this did not eventuate, no doubt due to his premature demise.

Here is the first stanza of ‘While the Billy Boils’ by Keighley Goodchild.

While the ruby coals in the dull grey dust,
Shine bright as the daylight dies;
When into our mouths our pipes are thrust,
And we watch the moon arise;
While the leaves that crackle and hiss and sigh
Feed the flame with their scented oils,
In a calm content by the fire we lie
And watch while the billy boils.

“…Ian Mudie in his book ‘Riverboats’ suggests that “it is so different from the rest of Goodchild’s work that it seems quite likely he heard it on the riverboats or in the pubs of Echuca – and wrote it down as his own.”

So perhaps Keighley Goodchild did not write ‘A Nautical Yarn’ after all!

To further complicate matters, there is more than one tune for the song. Goodchild’s stated tune was ‘The Dreadnought’, but Burl Ives’ folio of Australian songs used ‘Villikins and his Dinah’.

Who knows, perhaps Goodchild would have developed into a writer to rival Lawson and Paterson if he had lived longer? Then again, that can no doubt be said about a number of writers whose lives were cut short in those hard, early days.

I sing of a capting who’s well known to fame;
A naval commander, Bill Jinks is his name.
Who sailed where the Murray’s clear waters do flow,
Did this freshwater shellback, with his Yeo heave a yeo.

To the Port of Wahgunyah his wessel was bound
When night comes upon him and darkness around;
Not a star on the waters it clear light did throw;
But the wessel sped onward with a Yeo heave a yeo.

“Farewell to the maiding – the girl I adore;
Farewell to my friends – I shall see them no more!”
The crew shrieked in terror, the capting he swore –
They had stuck on a sandbank, so the men walked ashore. 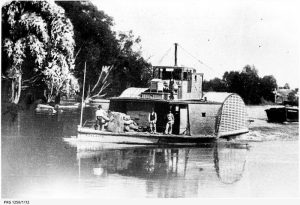